The word ‘Hinduism’ was coined by the West to identify the religion of the people of India. The Persians originally called the people living on the banks of the Sindhu River as ‘Sindhus’, but due to their pronunciation of the letter ‘S’ as ‘H’, the word became Hindus. What is termed as Hinduism is therefore not the true identification of the religious practices of ancient India. The correct expression used from time immemorial is Sanatana Dharma.

Sanatana means ‘Eternal’ and ‘Dharma’ has no equivalent English word.  The nearest words used often are righteous way or laws of nature.  Sanatana Dharma is the eternal natural law of living. Sanatana Dharma does not have a Founder or one text to follow. It is simply a way of living under the Divine law and has been detailed in the four Vedas.  There is no recorded history of who wrote the Vedas.  They are considered as revelations to a number of saints and sages.  The composition of the Vedas is dated to be more than 2500 BC.  The four Vedas are Rig Veda, Yajur Veda, Sama Veda and Atharva Veda.  One of the greatest saints of India, Maharishi Vyasa, compiled the verses of the Vedas and structured them into four Vedas.

Each Veda consists of four parts – the Samhitas (hymns), the Brahmanas (rituals), the Aranyakas (theologies) and the Upanishads (philosophy). The collection of mantras or hymns is called the Samhita. The Brahmanas are the text of Rituals. Aranyakas deal with meditation and mysticism.  Upanishads are the last Chapters of Vedas and are also known as Vedanta, meaning last Chapters of Vedas. Upanishads discuss the deep Philosophical thoughts and attainment of Moksha or Union with the Supreme Soul.

Rig Veda is the oldest of the Vedas and the more than ten thousand hymns are adoration to various deities.  It also contains the wedding procedure and good living guidelines, etc. Yajur Veda has mantras for various rituals. Sama Veda has many of the contents of Yajur Veda but is specifically for singing.  Atharva Veda is again poetical and deals with political, philosophical and health related issues.

Brahma Sutras were composed by the sage Badarayana to reconcile the seemingly different meaning in a number of Upanishads and the Bhagavad Geeta, in the form of Sutras or crisp statements. One other most important scripture of Sanatana Dharma is Bhagavad Geeta, which deals with every aspect of life.

In addition to the above scriptures, two important Historical masterpieces, Ramayana and Mahabharata, have immensely impacted the lives of people in India. It is believed that God incarnates himself on Earth whenever there is injustice in the World.  Sri Rama of Ramayan and Sri Krishna of Mahabharat, are two of the greatest incarnations worshipped by all Hindus.

Life, according to Sanatana Dharma, is based on four principles: Dharma, Artha, Kama and Moksha.  That is, leading a righteous life in tune with the natural law and acquiring wealth and fulfilling desires and eventually working towards attaining Moksha or Nirvana. Another belief is the Theory of Karma.  That is, whatever actions one does in this life, one will correspondingly reap the benefits or experience hardship. This encourages people to live a highly ethical life dedicated to helping others. Theory of Karma leads to theory of reincarnation.  The individual soul is on a journey towards reaching the Supreme Soul, which is the ultimate goal of human existence. The Upanishads declare Satyam, Shivam, Sundaram.  God is Existence, Knowledge, and Bliss.

Through more detailed articles, one can read more about the Vedas, some of the Upanishads, Geeta Yoga and Meditation, which form the basis of Sanatana Dharma. 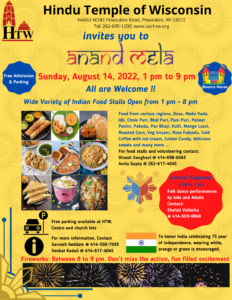