There had been several attempts to build a temple in the Milwaukee area since 1980. The community worshipped by renting space in churches and having all major Hindu functions conducted by priests hired from temples in Illinois. In 1995, leading members of various Hindu communities in southeastern Wisconsin decided to try again. They formed an Exploratory Committee and incorporated Hindu Temple of Wisconsin as a nonprofit corporation in March 1996, created a business plan and organized various sub committees to handle this massive project. A group of board members and some community members visited various Hindu Temples in North America and researched design, construction, by-laws and financial aspects of operating a temple. Gradually, the temple project gained momentum and started attracting new members and volunteers. After months of hard work, the board members came up with the by-laws, the structure for fund raising and the blueprint for what is now our temple. At the same time our religious and fund raising committees actively solicited funds from our community and came up with various categories of membership for donors.

The present piece of land was located in May 1997 and an offer to purchase the 22 acres for $252,000 was made by the Hindu Temple. The land had to go through probate as it was an estate property and the court approved the sale on Aug 8, 1997. The Board along with Ramesh Kapur (of Kapur and Associates, the architects for the project) designed the preliminary drawings for the temple and came up with 26,000 sq. feet for a Hindu Temple, and 5,000 Sq. feet for a Jain Temple and Library, in a record time of two months.  On October 23, 1997, the project was approved by the City of Pewaukee. The land was purchased and transferred to the Hindu Temple on October 31, 1997, a very proud and memorable moment and a great relief to the board members and all the volunteers. The next 15 months were spent on designing the facility and getting various approvals. The final drawings went to bid in January of 1999 and the board chose Panko Constructions to build the temple. Construction started in June 1999 and was completed in a record time of one year by June 2000, at a cost of $3.4 million. In July 1999 Tri-City Bank provided a Loan of $2.0 million dollars and enabled us to complete our project on time.

The Jain community was also interested in a place of worship and their membership worked with the board to come up with a Temple funded by the Jain community, and designed it to be an integral part of the Hindu Temple complex.

The Jain Temple (www.jainwi.org) opened for worship in July 2000. Both the Jain and the Hindu Temple worked on designing various shrines inside the buildings and marble and granite deities were ordered from India. In the meantime, Utsav murthis (made of special metal) were placed in the shrines. The Jain Temple Pratishtha was done in May 2001 after their temple construction was completed. The Hindu Temple had 4 artisans from India working on building the shrines for 18 months. The first group of deities in the Hindu Temple had Pratishtha done in June 2002 and the remainder in June 2003.

The temple had deferred the construction of a Mukhya Dwar and the main Gopuram from the initial plan. In 2006, donors came forward to be the main sponsors for the Gopuram and Mukhya Dwar project. A sum of $200,000 was pledged by the families and the project cost a total of $250,000. The Gopuram was finished in 2008 and Mukhya Dwar was completed in 2010.

The Hindu community has grown tremendously since the temple was built in 2000. The temple plan also called for installing a Dhwajastambh (the traditional flag pole), within 13 years of the Pran Pratishtha. The overwhelming support of the community made it possible to pay off our initial debt of 2 million dollars in the year 2014. A master plan for the expansion of the temple, “Vision 20/20”, was developed in 2011 to project the needs of the temple till the year 2020. Phase 1 of the plan is set to start in April 2015 and is expected to be completed by the end of the year. The cost of the project is set at $2,000,000. The new addition will be 8,200 Sq. feet and the upper level will have a Dhwajastambham, bigger front office, new rest rooms, coat room, lobby, a new staircase to the lower level and more parking space. The lower level will add a small auditorium, new rest rooms and a coat room. Also, in this expansion we will increase the lobby upstairs by 900 sq. feet to accommodate more devotees. In the lower level, 900 Sq. feet will be added to the cafeteria space. The next phases will address storage, priest and temple facilities, classrooms and a bigger auditorium and parking lot.

We need continued support financially from all our community members so we can keep up with the Vision 20/20 plan and offer the best service and facilities to our community. We the members are proud of our achievements in the last 20 years and commit ourselves to leave a legacy of Hindu religion for our future generations to come

The temple serves the needs of the Indian Hindu community in the state of Wisconsin. Occasionally, there are visitors from other states; sometimes license plates from all over the Midwest can be spotted in the temple’s parking lot.

Of the Indian community in the state of Wisconsin, our temple draws support from a balanced representation of India’s ethno-linguistic communities. From southern India, there is a strong presence of those speaking Telugu, Tamil & Kannada. The western region of the Indian sub-continent is mainly represented by Gujaratis and Marathis, the East by the Bengalis and Oriya. There are also a large number of people of North Indian descent attending this temple. In addition, Indians of other faiths see this temple as a meeting ground for Wisconsin’s Indian-American community and attend various events.

There are a few families who have been living in the United States for more than twenty five years, but most of the Indian-Americans in Wisconsin started arriving in the 1990s; so our temple’s devotees are mainly first generation parents (in their 30s, 40s and 50s) with young/adolescent children. Some families, having been here for decades, are older and have children, who are also married with their own children. There are also many elderly parents of first-generation of Indian-Americans who attend the temple.

Interactions with other Communities

The Exploratory Committee initially made an agreement with the Jain community to have both the temples built on one site. In addition, there are occasional church and school groups, which visit the temple to learn more about its mission and activities as well as about Hinduism. The Religious Committee has a strong sense of the benefits of interfaith activities and welcomes any exchange of ideas. In terms of non-religious connections to the community, the various ethno-linguistic groups such as Bengali Association, Gujarati Samaj, Kannada Koota, Maharashtra Mandal, Tamil Sangam, Telugu Association etc. volunteer their services at the temple as well as conduct pujas on special festivals/holy days at the temple. Occasionally, these groups, as well as other community members, also rent the auditorium downstairs for community events. In addition to each such association encouraging its members to fund and support this temple, they also encourage members to volunteer their time cooking Sunday Cafeteria meals that are sold at the temple to fund day-to-day operations. Moreover, there are even administrative and special events’ volunteers. In addition, there are several All-India community groups such as the Wisconsin Coalition of Indian Associations and the India Religious Society, which recognize the potential of this place of worship to also be a community center and support it.

There are creative donation programs to entice devotees to financially support the temple’s efforts. The Mandir Shobha program is a quick and easy way for all devotees to make monthly contributions to temple operation and maintenance. The “Sponsor-A-Day” program encourages devotees to contribute $600 to cover that day’s temple expenses. Therefore the devotee is the temple’s sponsor for one day as the name implies. In turn, the devotee’s name is listed on the “Sponsors for a Day” plaque in a prominent place in the temple lobby. There are other rewards as well; however, the public recognition of its donors is a strong draw for many devotees to contribute. There are large plaques listing the names of major donors in the temple lobby and staircase. In addition, their names are reprinted in temple announcements/newsletters, etc. Forms for all of these funding programs are available online as well as in the temple lobby.

Occasionally, the temple will have entertainment events in our auditorium. Such dance and song troupes from India often do tours around the United States visiting temples and community centers. In addition, there might also be events put on by local ethno-linguistic groups such as Bengali Association, Gujarati Samaj, Kannada Kota, Maharashtra Mandal, Tamil Sangam, Telugu Association etc. The auditorium is also rented to community members wishing for a religious highlight to their wedding or birthday celebrations, etc.

Educational classes are held at the temple throughout the school year. Hindi Classes have three sections divided by the age of the pupils. Classes meet on Sundays. Similarly, there are even Yoga classes. Religious/spiritual classes include a “Balshiksha” course for young children to learn about Hindu mythology/gods/folk tales. Children as young as three may join these classes. For older children there are classes on Hindu religion/culture as well as recitation of the Vedas. All of these classes meet on a weekly basis and require a small registration fee.

There is also a regular call to donate clothes and books. We send frequent emails about donation days and various drop-off sites. In addition to the community service efforts arranged through the SEP, there are also annual service events such as donating meals on Thanksgiving Day. In the aftermath of September 11, the temple invited local officials, Congresspersons and devotees for a special service in the auditorium. In a span of a few hours, we managed to raise $65,000 in donations to the Red Cross.

More information about upcoming events, directions, logistics, activities & programs can be found on this website. 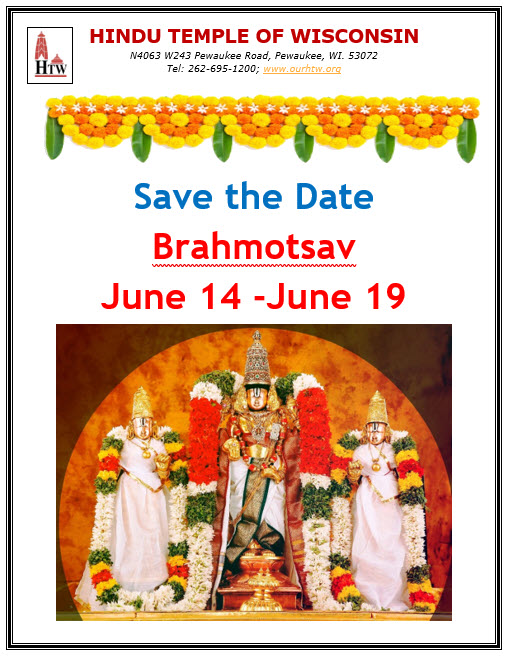